Categories of surnames found in Ireland: 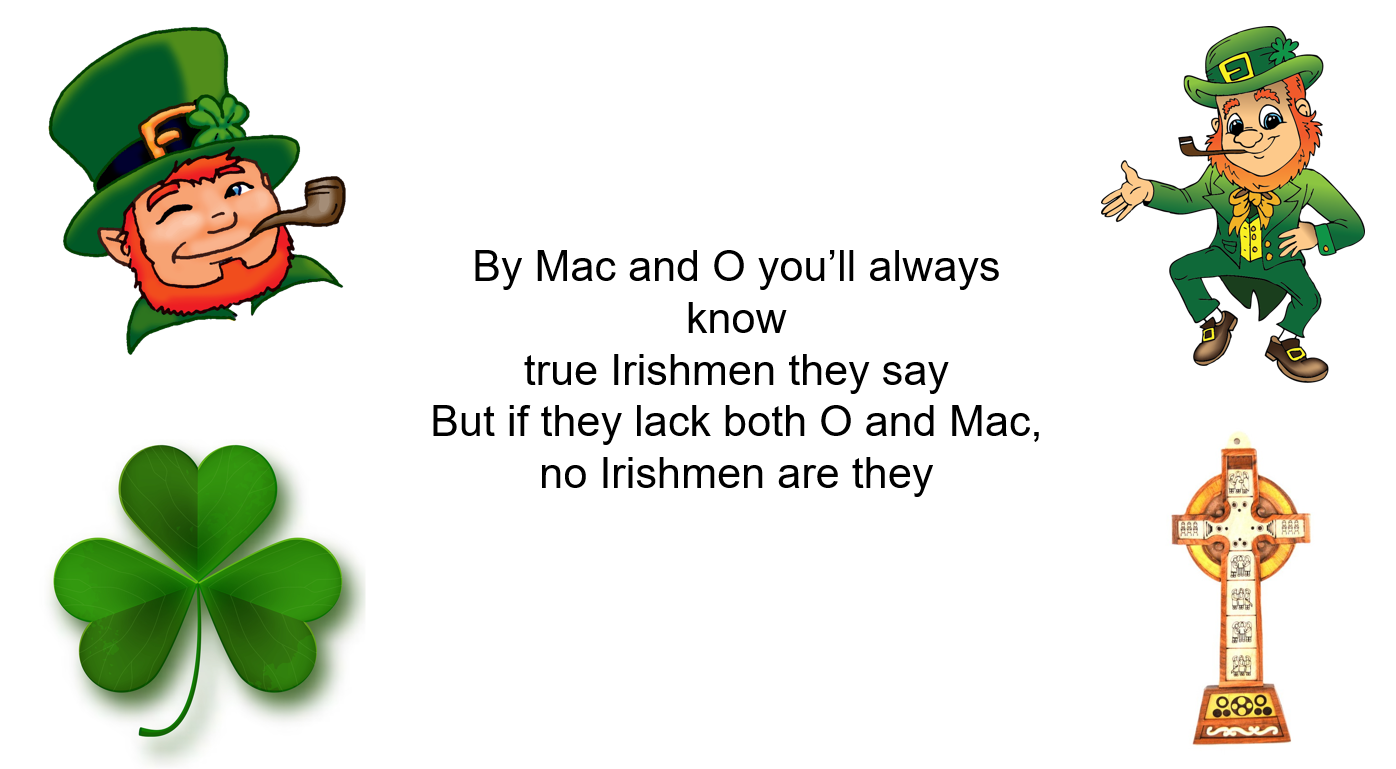 Gaelic Irish surnames, born by the aboriginal population from the time when surnames were adopted (900 to 1100)

British surnames, mostly from England and Scotland, planted in various parts of Ireland 1540 to 1700

Why is surname research relevant to genealogy?

Theoretically one’s surname preserves the name of a direct male ancestor who may have lived up to 1,200 years ago

Theory is that in the Irish medieval clan society, servants and followers took on the name of the overlord and thus lost their own surnames

Yet the bulk of y-dna studies do confirm one or two main groups per single surname: conclusion, the majority of people do bear the correct ancestral surname

Therefore one’s surname is a valuable heirloom. When genealogy is complete, and inevitably fails due to absence of records, only two methods of continuing the family tree remain, surname research and y-dna research

There are five types of Irish surname

Descriptive: describing the physical characteristics of the ancestor: Short

Occupational: based on the occupation of the ancestor when the name was adopted: Fuller

Cognomenic: based on a nickname given to the ancestor: Dullard (= idiot)

Toponymical: based on the place the ancestor came from: Landers (of London)

Ancestral: based on the forename of the ancestor: MacMahon

All the above are Anglo-Norman or British. In the same category are some Irish surnames, i.e. Mead, Galway, Ardagh

But if they lack both O and Mac, no Irishmen are they”

In Ireland it is almost always the name of direct paternal ancestors or papponymics which is used to form the surname: these are patrilineal surnames from the father. In some societies descent was matrilineal, through the mother.

For example, the Picts in Scotland, the Tuareg in the Sahara

How were such names chosen?

Walsh: many different and unrelated families occur, a generic term for the hundreds of Welshmen who settled in various parts of Ireland with the Normans

Why are some surnames more common than others?

Example 1: Richard Burke, earl of Clanrickard, who died in 1582, had six wives

Example 2: Conn Bacach O’Neill, earl of Tyrone, who died in 1558, admitted to siring over two dozen sons by various women

Examples of septs in service roles with greater lords:

O’Ahearne, originated in Co. Clare. An early connection with the FitzGeralds of Desmond in east Clare. Later, when the FitzGeralds expand into east Cork in the 1400s the Ahearns become plentyful there as tenants, stewards and yeomen to the Geraldines. Today most Ahearns are found in east Cork