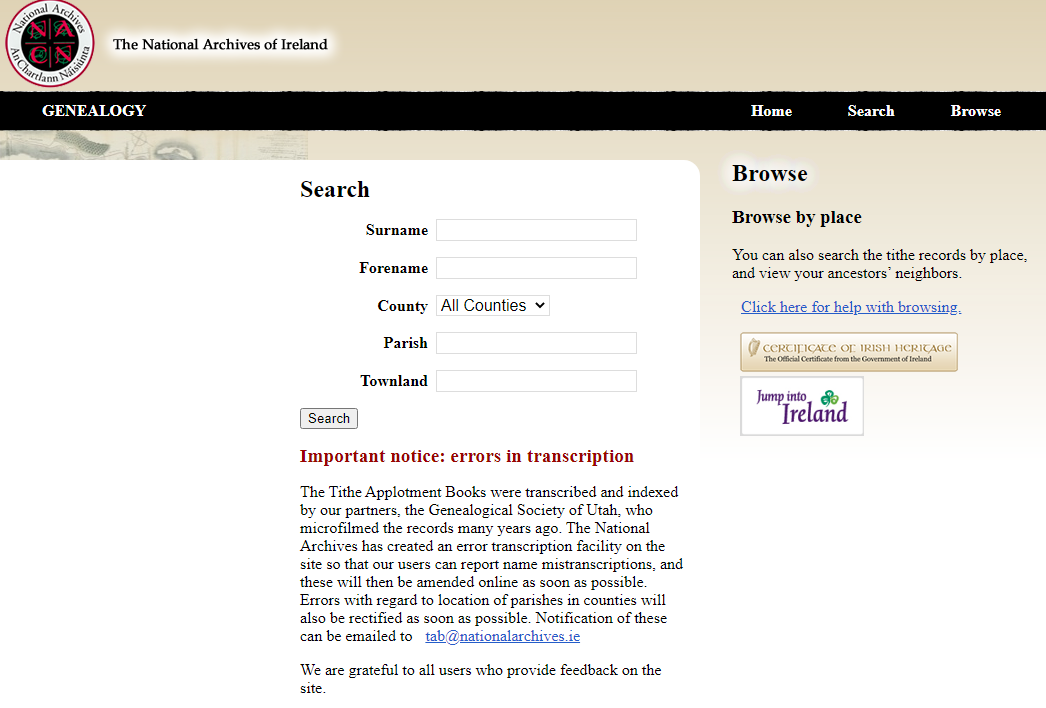 In my last blog I dealt with the history of the Tithe Applotment Books in Ireland. In this blog I deal with this set of documents as a census substitute, a genealogical source.

The Tithe Applotment Books are a vital source for genealogical research for the pre-Famine period, given the loss of the 1821-51 Census records. They were compiled between 1823 and 1837 in order to determine the amount which occupiers of agricultural holdings over one acre should pay in tithes to the Church of Ireland. There is a manuscript book for almost every civil parish in the country giving the names of occupiers of each townland, the amount of land held and the sums to be paid in tithes. Because the tithes were levied on agricultural land, urban areas are generally not included, although there are exceptions to this rule.

The books, the originals of which are in the National Archives, have been digitally imaged, and a database giving surname, forename, county, parish and townland created. All of these fields can be searched, and there is also a browse facility, which allows users to survey entire parishes and townlands. This site has only digital images of the books for the Republic of Ireland. The website url is  http://titheapplotmentbooks.nationalarchives.ie/. In addition to the website most city and county libraries possess microfilm of the books, and in some cases researchers have copied parish details into private websites.

The books for Northern Ireland are in the Public Record Office of Northern Ireland (PRONI), but there are microfilm copies in the National Archives. The PRONI website offering comes in a complex presentation which can be difficult to access. For the details on how to access this the reader is best directed to Claire Santry’s website at https://www.irish-genealogy-toolkit.com/tithe-applotment-books.html

Returning to the main website, there are a number of problems with this. The main one concerns townland names and addresses. (The townland is the basic spatial unit in Ireland, and can range in extent from a few acres or hectares to several thousand acres or hectares.) Irish townland names and shapes, while often being centuries old, were not standardised in regard to borders and names until the work of the Ordnance Survey during the 1840s, when Ireland was accurately mapped for the first time. Therefore in some cases the Tithe books will record names of townlands which no longer exist. Here of course the researcher may uncover at least the approximate shape of the ‘lost’ townland by comparing tenants’ names to those recorded in the next generation Griffith’s Valuation. The researcher should also be aware that the acreage given in many cases in the Tithe books is in Plantation acres (one Plantation acre equals 1.6 Statute acres approximately).

A second problem, or set of problems, can be attributed to the work of the Genealogical Society of the Church of Latter Day Saints. This is the organization which performed most of the work of digitising the Tithe books. Of course we should be very grateful to the Society for their work here, without which we would not have this wonderful database. However, it is clear from the finished work that the transcribers in many cases were not familiar with Irish surnames or Irish townland and parish names, thus creating major problems. We might take the example of the townland recorded on the website as Ralhsallagh in County Longford. Anybody with even a little experience of Irish surnames will recognise that the first element in the placename is rath and not ralh. Rath is, of course, the very common Irish placename element ráth, meaning a ring fort. Then, we note on the site one of the tenants is named as Hugh Grahaneur. When one looks closely at this obvious nonsense it turns out that the surname is Graham. While these are relatively minor mistakes there are many of them, but perhaps more seriously there are also mistakes at parish level. As an example we might take the parish of Carrigtwohill, Co. Cork. Among its townlands as listed is Carrigdownane. The problem is that Carrigdownane is a distinct parish thirty miles north of Carrigtwohill. Staying with Carrigtwohill itself we find at least four mistakes in its townland names, including one townland listed as ‘Dublin’ and the farmer’s name as ‘James French’. When we open this page it turns out that French was not a farmer at all but the Tithe Commissioner, the official whose duty was to supervise the process in each parish. French, in his official statement at the end of the Carrigtwohill tithe book, mentions a newspaper called the Dublin Gazette, published in Dublin. The non-Irish transcriber has here made a newspaper title a townland as there is no townland called Dublin anywhere outside of Dublin itself. It is also clear that the transcriber has no idea of the meaning of the commissioner statement, part of every parish book. Yet another difficulty with this source is the lack of any turn page function. One cannot access the next page from the current page. Note that there is an error report facility on the site but I’m not sure how effective it is.

In summary, the reader is recommended not to take this source as reliable, and to access film of the original books where possible. Alternatively, the researcher may consider employing a professional with expertise in placenames and surnames, such as I offer.