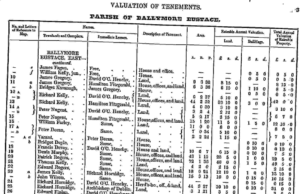 The term ‘census substitutes’ has been coined to refer to non-genealogy specific document types which contain material of genealogical relevance. These are needed as Irish census records have fared badly over time. Only two complete Irish census record sets are available online, those for 1901 and 1911. Regular state census record keeping was begun in Ireland in 1821 and continued every ten years thereafter.  The census records from 1821, 1831, 1841 and 1851 initially survived, but most of these were destroyed in a deliberate fire during the Irish Civil War of 1922 to 1923. Some copies of parts of these were made, but the vast majority of these records do not survive. The census’ of 1861, 1871, 1881 and 1891 were deliberately destroyed after various statistics were taken from them. This may have been due to paper shortages during the First World War. There are some earlier surviving census records however. There was a religious census taken in 1766 and, while many fragments survive, only three dioceses survive completely. A similar census of 1748 was made of the diocese of Elphin (containing all or parts of counties Roscommon, Sligo and Galway), and this survives in its entirety. A small number of parish census records survive which had been composed independently of the state census records. One of the very few such examples is that of the Catholic parish of Midleton, Co. Cork, census’ of which date to 1840 and 1848. After a gap from 1911 state census recording recommenced in Ireland in 1926, although the 1926 census has not been released to the public (for no good reason).

Turning to census substitutes themselves, there are a number of these, and I plan to blog each of these in due course. I will here just give a brief outline of each type from a genealogical vantage point.

The Valuation Office cancelled rate books record the heads of most households in Ireland, based on annual visits by rate valuers to all homes and properties. These books recorded rates amounts and payments, a form of property tax. The relevant period of recording, dates from the initial published Griffiths Valuation rates as commenced in various parts of Ireland between 1848 and 1864, down to the abolition of domestic rates in the late 1970s.

Griffith’s Valuation is the original published survey which established the tax collection system in each part of Ireland at various dates from 1848 to 1864. The genealogical relevance of this source lies both in the recording of each householder and in accompanying maps showing homestead and property locations.

The Valuation Office House, Field and Tenure books are collections of notebooks used in establishing the valuation, and record similar data as found in Griffiths Valuation but with extra features of genealogical relevance, such as for example house measurements, among others. These documents generally date to between one and five years before the publication date of Griffiths Valuation. Unlike the other two sources listed above, the House, Field and Tenure books are not a comprehensive source for the entire country as there are gaps and in some cases the surveys were limited in area.

The Tithe Applotment books record the tithe payable to Anglican parishes and other possessors of this tax, which was originally a church tax. This is facilitated by recording the names and acreages of farmers and landholders in each Anglican or civil parish as well as the amount of tithe paid. Its genealogical relevance lies in recording the names of the farmers and landholders, their townland location, the acreage of their holding, and the date (generally lying in the range 1825 to 1835).